Lots of us have probably experienced a toxic employer at some point in our lives. I had a boss many years ago who would lash out at colleagues and me during staff meetings with little provocation, putting everyone on edge. Yet he was also hailed among higher-ups as someone who got the job done. So, should we have just put up and shut up?

According to the new book Mastering Civility by management professor Christine Porath, the answer is absolutely not. Porath makes a clear and compelling case that rudeness and incivility in the workplace do more damage than good to work relationships and efficiency, soundly dispelling the myth of the hard-nosed-yet-effective boss. Instead, she argues, we would do well to practice civility at work.

The costs of rudeness at work 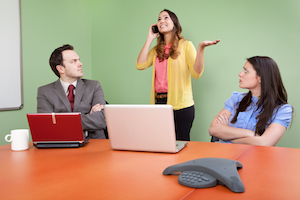 Civility in American society has declined in recent years but remains important to people, according to surveys. When employers or employees ignore people at work, walk away from conversations, answer calls in the middle of meetings, publicly mock and belittle people, or take credit for wins while pointing fingers when things go sour, it destabilizes relationships and creates hostile work environments, says Porath. And research shows that poor relationships at work increase stress in ways that can impact employees’ health and relationships outside of work, leading to decreases in workplace performance—all of which costs the organization in the long run.

Rudeness can have a toxic impact on creativity and problem-solving, says Porath. In one experiment, participants did 33 percent worse on a puzzle involving anagrams and had 39 percent fewer creative ideas on a brainstorming task after being belittled as a group. In another experiment, even just witnessing incivility caused participant performance on the same tests to decrease by 20 and 30 percent, respectively.

“Rudeness affects your mind in ways you might not even be aware of, disrupting your ability to pay attention,” writes Porath. And it can even be deadly. In a survey of doctors and nurses, 71 percent tied “abusive personal conduct” in the workplace to medical errors they knew of, and 27 percent tied it to patient deaths.

Luckily, when those in positions of power do the opposite and practice civility, it can have many important benefits, says Porath. People who demonstrate kindness and who lift up others are seen as more warm and collaborative and are more admired as leaders. And supervisors who show respect toward others are more likely to have committed and engaged employees, she says, and be more nimble in the face of challenges.

“When leaders are civil, it increases performance and creativity; allows for early mistake detection and the initiative to take actions; and reduces emotional exhaustion,” writes Porath. In turn, when employees practice civility by being attentive in conversations, not interrupting, and smiling, their behavior is reciprocated and spreads to other employees, thereby improving the whole culture of an organization.

Luckily, her research has found that “incivility usually arises not from malice but from ignorance.” Because of this, she suggests increasing your own awareness by taking an incivility test she developed to help you see the many, sometimes subtle ways you are being rude without recognizing it.

Another tactic she suggests is learning more about our unconscious biases, which often lead to rude and exclusionary behavior. We all have biases—whether based on race, gender, religion, or political affiliations—and we need to learn to recognize them and take steps to counteract them. Individuals can reduce bias by spending more time with people whom we consider different, practicing empathic listening and communicating, and recognizing each other as part of the same team. In that way, we are more likely to diversify our workforce, too, which research shows leads to better, less-biased decision making.

Once people understand the importance of civility, they need to up their game to create a place where kindness is the norm and relationships thrive, says Porath. She has identified five forms of giving in a work setting that help people to get along better and be more productive:

1. Sharing resources. It may seem counterintuitive to share resources of time or money with others in a competitive work environment. Yet research shows that people who give more of their resources away are happier and more successful than those who give less. Wharton economist Adam Grant has found that generous salespeople had the highest revenues, and medical school students who helped others attained top grades.

2. Sharing recognition. No one wants to work with someone who hogs all of the credit when things go well, but then points fingers when things go wrong. Research shows that leaders who demonstrate humility and give credit to others when they succeed tend to have employees who are more engaged, satisfied with their jobs, and loyal to the organization.

3. Sharing gratitude. When you thank others for their contributions, you are bound to improve relationships in the workplace. Research suggests that when employees are thanked by supervisors, they enjoy more self-worth and confidence, and are more likely to help others. Besides, gratitude is tied to personal well-being, in general.

4. Sharing feedback. This isn’t about individual performance alone; it’s about sharing feedback about how the organization is doing as a whole. Sharing organizational progress with employees increases their sense of ownership and contributes to performance. Also, when giving individual performance appraisals, it’s important to focus more on strengths than weaknesses. Research suggests that “high-performing teams share six times more positive feedback than average teams.”

5. Sharing purpose. People want to do meaningful work and to know they are contributing to something greater than themselves. So it’s important that they know their efforts count for something that matters. Getting feedback from customers or others who benefit from an organization’s efforts can be a good way of inspiring employees.

Porath encourages organizations to create an atmosphere that fosters civility and improves worker health, performance, and loyalty. Often it takes just one person making a change for the better and indirectly infecting the rest of the team with kinder energy. The key is recognizing our own issues with incivility and taking concrete steps to solve them.

“Be brave. Try civility on,” advises Porath. “My bet is that others will like it. And so will you.”